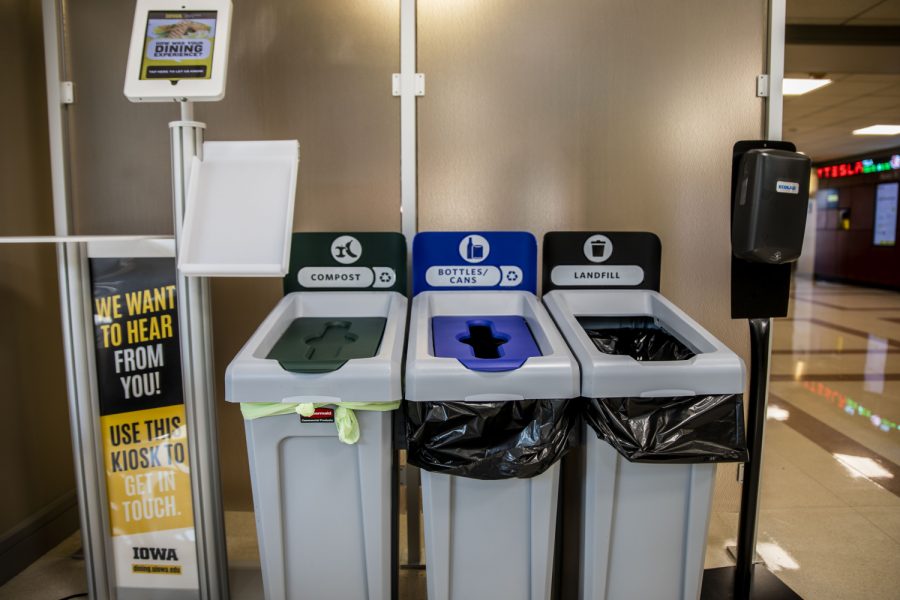 The University of Iowa’s Tippie College of Business has a new compost bin in Pat’s Diner to reduce waste on campus.

A new green compost bin can be seen on Monday, August 30, 2021. The new bin is located in Pat’s Diner, which is in the Tippie College of Business building.

Pat’s Diner in the University of Iowa’s Pappajohn Business Building added a composting program to the cafe this year as the Tippie College of Business continues to push for more sustainability efforts on campus.

The composting station in the diner includes bins that collect food waste such as coffee grounds and unfinished sandwiches.

“Composting is actually a process of converting organic materials – basically breaking them back down into compostable materials that can be added back to the soil,” said Beth MacKenzie, sustainability program manager for the UI Office of Sustainability. “It breaks down, you know, food waste or plant waste into materials that look like dirt, but it’s not actually dirt.”

The composting project at Tippie began with a pilot program that ran in 2020 before college began expanding the composting stations.

“We had a pilot program and it went really well,” says Sarah Maples, Research Support and Sustainability Manager at Tippie College of Business.

When Maples spoke to the elected Tippie staff council about expanding the project, she showed great interest.

“Our elected staff council was delighted and pushed for it,” said Maples.

However, according to Maples, composting is not as easy as it sounds as many factors could easily contaminate the product. The contamination of the compost must be below 1 percent to be used, she said.

Devin Kurbyun, the college’s social responsibility project coordinator, said composting can be difficult to coordinate, although it is very convenient because it can be so easily contaminated.

Since the business college has its own composting stations, the UI Office of Sustainability will reap some of the benefits, Maples said.

“They are able to capture materials that we currently cannot capture on campus,” said MacKenzie. “If a college like Tippie undertakes to collect compost or organic material for composting, it is material that would otherwise end up in the landfill. In our dining rooms, however, we already capture all of this. It’s part of the process there. “

The new expanded composting sites are more accessible to students than the pilot version, Maples said.

“There were still three sites, but they weren’t as accessible to college students – undergraduate students – and that’s really the difference,” said Maples.

Maples said Pat’s Diner also generates the most food waste on campus compared to other locations where stations were previously placed, like the Pomerantz Career Center.

A third-party company, Compost Ninja of Iowa City, is collecting the compost material from the university.

Kurbyun said the company would come every Tuesday and Thursday to collect the compost. Once the compost is removed, the process is very convenient for those involved, other than not being contaminated.

“As soon as you pick it up, put it in your pile like a landfill and don’t touch it,” Kurbyun said. “All you have to do is stir it up – make sure there are no contaminated materials in there.”

Another factor making composting difficult is a lack of knowledge of what types of waste can be composted, Kurbyun said.

“What we are finding out now, and what I want to find out as an intern, is – how can we educate more people about composting so that we can expand it even further?” Said Kurbyun.

As the project progresses, Kurbyun and Maples both hope to expand the project and inspire students to become interested in composting.

“The main goal is to actually expand composting and make it as efficient and clean as possible,” Kurbyun said. “I think one of the goals is to make people personally believe that they can change something.”