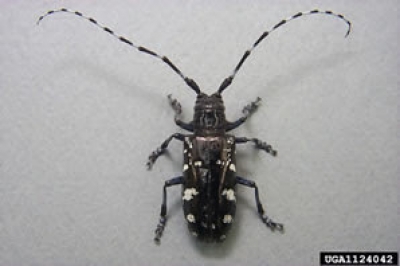 RALEIGH – Alien invasive pests are an increasing threat to our agricultural systems and forests. In recent years, invasive species have caused widespread mortality. For example, the emerald cinder that kills ash trees, the hemlock wool adelgid killing hemlock, and the laurel wilt disease that kills redbay and sassafras.

Poolside Pests is an awareness-raising program for Asiatic longhorn beetles and spotted lantern flies. It is so named because these pests are attracted to water and can be found in pools and pool filters. Pools across the state can act as traps for these pests, and North Carolinians are encouraged to report the pests if they see them. Early detection is vital as management tactics are most effective when a new invasion is quickly identified and reported.

While the Poolside Pests program is aimed at pool owners and managers, it is important that everyone keep an eye out for them as these insects can be found everywhere.

The Asian longhorn beetle is native to Asia and was first found in New York, USA, in the mid-1990s. It has appeared sporadically in the Northeast and Midwest since then, until it was first found in the South last year and is much closer to North Carolina than ever before. It affects many types of hardwood trees, but prefers maples.

The spotted lantern fly is native to Southeast Asia and was first found in the United States in Pennsylvania in 2014. It is expanding its range rapidly and was discovered in Virginia in 2018 and continues to spread towards North Carolina. It is a significant nuisance pest and a major agricultural pest, particularly grapevines, fruit trees, hops, and many species of trees.

All North Carolinians are encouraged to learn how to detect and report these pests at https://www.poolsidepests.com/. If you suspect you have found any of these pests, click the Report a Pest link on this page.

‘Poolside Pests’ is a collaboration between the Plant Industry Division, NC Forest Service and the NC State University Cooperative Extension.