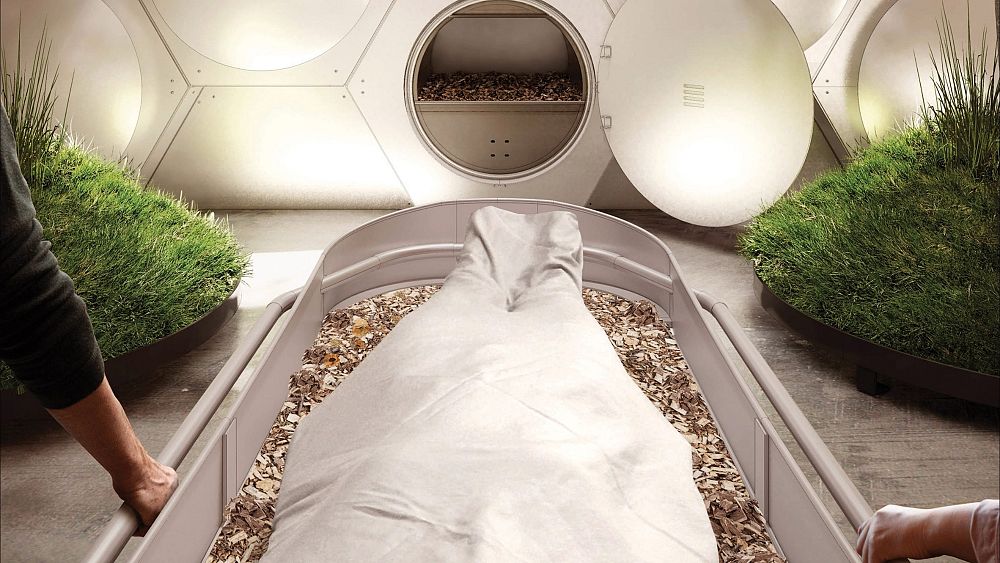 How would you most like to be buried when you die? One option you may not have considered is now possible: to be turned into earth.

The world’s first human-composted funeral home in the United States is now operating in the city of Seattle, Washington.

The company called Recompose can turn a corpse into about a square meter of earth (the value of several wheelbarrows) in just 30 days. This saves more than a ton of carbon dioxide compared to cremation or traditional burial and uses only one eighth of the energy required for cremation.

The process, which the company calls “recomposition” or “natural organic reduction”, is based on the traditional principles of natural or green burialsbut takes place within the reusable ‘hexagonal’Recomposition vessels‘.

How does it work?

The bodies are covered with wood chips, alfalfa and straw grass and ventilated, creating the perfect environment for naturally occurring microbes and beneficial bacteria.

Once the body is turned into compost, family and friends are encouraged to use some or all of the earth for their own gardens.

Recompose took nearly a decade of planning, research, and fundraising – as well as a successful campaign to amend state laws to allow human composting – to become a legally viable service.

The managing director and founder of Recompose, Katrina Spade, says that many people have been interested in the € 4,500 service because of climate change.

From Trees to Mushrooms: Other Green Burial Options

While Recompose is the first to offer the composting option, eco-friendly burials are not a new concept.

In September 2019, the Italian designers Anna Citelli and Raoul Bretzel presented Capsula Mundi at an exhibition in Milan. Mundi capsule is an egg-shaped pod attached to a tree.

This biodegradable urn helps to transform the body through its natural composition and to nourish the tree in the process.

“Cemeteries will get a new look and instead of the cold gray landscape that we see today, they will become living forests, sacred forests”, the designers explain with the tree “serv[ing] as a memorial for the deceased and as a legacy for posterity and the future of our planet. “

Both Citelli and Bretzel emphasize the irony of using a traditional coffin over a tree alternative.

“To make a coffin, a tree has to be felled,” they say. “The coffin has a short life cycle, but has a high environmental impact. A tree takes between 10 and 40 years to mature and the coffin can only be used for three days!”

But when an egg-shaped pod isn’t your final resting place, alternatives are increasingly available.

Leaves with you is a biodegradable macrame coffin that invites family members and mourners to help design the coffin.

The woven mesh designed by Shaina Garfield contains fungal spores to accelerate the decomposition of the body. This mushroom is also essential for absorbing toxins and ensures that only natural by-products such as oxygen and nitrogen get into the soil.