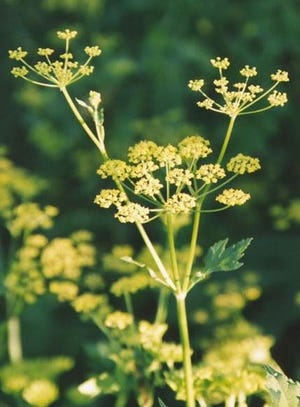 Too bad about the carrot family. It has some unsavory relatives. You should not be invited to the annual meeting if it is outdoors. They may bring party favors, but it is best to decline. Every family may have some unwanted cousins, but the carrot family has ancestry that dates back to ancient times. There are many stories, but with few happy endings.

Although not a native of Iowa, poison hemlock and wild parsnip have found our climate and soil conditions to be quite favorable. They like the roadsides, fields and natural areas to spread their growth. Hemlock likes streams and low areas, while parsnips likes the sun.

Both produce thousands of seeds that give them a chance to spread. Poison hemlock has become one of the most harmful weeds in our state, according to the Iowa State Extension. It seems that the bull thistle and the multiflora rose share the highest awards.

The wild parsnip looks like Queen Anne’s lace growing in our trenches, although the parsnip is usually yellow. The plant contains a sap called psoralen, which, when on the skin, causes a painful rash and sometimes blisters and burning pain. This can sometimes take months.

Poison hemlock is even more dangerous than wild parsnips because all parts of this plant are poisonous and can be fatal if eaten. The flowers are white and also look like Queen Anne’s Lace. Hemlock was the poison of choice when Socrates died in ancient Greece in 399 BC.

It belongs to the carrot family and is sometimes considered an edible wild carrot. People have mixed it up and livestock will resort to it when grass or other food becomes scarce.

It is advisable to wear protective clothing when exposed to any of these wild plants. Plants can be removed, dug or even mowed over the area by hand. Chemical control was used to prevent the plants from sowing.

If you come across one of these plants on your forest hikes or in the ditches, it is best to avoid them. If you’re having a gathering, make sure these two aren’t on the invite list.

A note about autumn: Late August, September, and October are the months to share irises, peonies, hosta, and lilies. The division can make plants healthier and multiply the flower power in your garden and garden. For best results for you and the plants, do this on a cool, cloudy day.

Why scientists wish to flip tree bark and compost into plane...