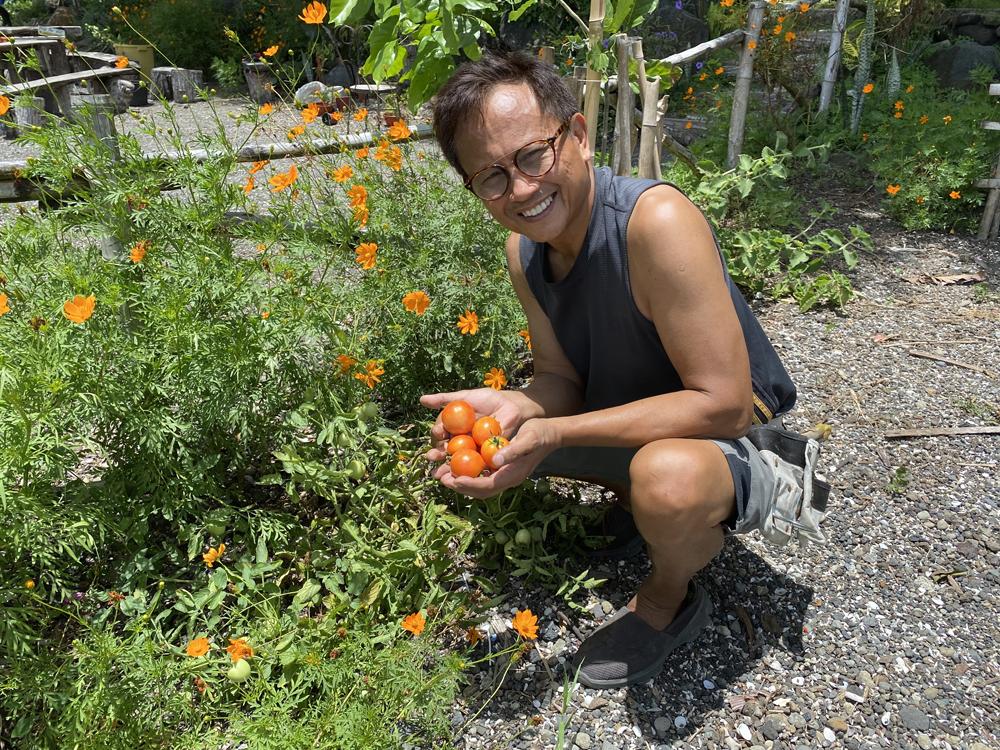 So it was the other day when I cut off some drooping flowers from my orange cosmos so that new growths could multiply. But when I looked into the mini forest of cosmos tribes, I noticed green and red balls that were not visible.

They were beautifully plump tomatoes that I could never remember. And what a strange place to grow them, in the shady undergrowth of a rowdy row of flowers. Even rookie halamen like me know that tomatoes that need strong direct sunlight shouldn’t thrive in the shade of anything.

So somehow these well-fed babies found a key to a happy life in such disadvantaged conditions.

After pondering this riddle for a moment, I realized that the answer lay in the compost.

When the orange cosmos (aka “cosmic orange”) were fragile babies themselves, I transplanted them to a bare sand spot. But first I dug small holes that I filled with self-grown compost.

Like many households trying to be environmentally sound, our composting has turned into an obsessive craft like making soap. But what we do is basically superboden, a process that starts with separating leftover food in the kitchen and at the dining table.

Meat and fish that are not part of our pets’ diet are placed in a small “bokashi” drum, where they are fermented with “inoculated bran” (I’ll keep the appetizing details for further “adventures in composting”). History). A bokashi by-product is a nutrient-rich tea for our gardens.

However, vegetable and fruit scraps are placed in a small pen in which they are mixed with tidy leaves. There, decomposition is accelerated by an insatiable species of earthworm called the African night crawler. This may induce some hideous creeps, but these creatures are indeed hugely beneficial agents for efficiency, quickly turning what counts as junk elsewhere into one of the most important substances on the planet: rich, fertile soil.

Naturally decomposed food residues mix with the so-called vermicast or worm droppings, the result of the digestion of the organic matter in the compost barn by the worms. Vermicast is not only rich in nutrients, it also helps the soil to absorb and store moisture. It’s the secret sauce of our compost.

What we actually practice at home is poor composting, far from properly separating the soil by-product from stray raw or semi-decomposed matter. Instead of rotting, some fruit and vegetable seeds naturally find this environment to be a kind of paradise.

After a sumptuous meal of plump heirloom tomatoes, some of their seeds inevitably ended up in the compost, where they were mixed with the vermicast and super-soil used to fill the flower beds for the orange cosmos. The rest is a piece of micro-natural history that was recorded at the beginning of this story.

This whole process, with its surprising dissolution hidden in the midst of the flowers, cannot be just a simple nature narrative, not in the age of Covid.

In our uniquely agonizing time with death and fear of everything around us, composting and gardening in general is something reassuring. What is considered waste is scientifically, but also magically, transformed into a life-sustaining power.

You can’t help but see it as a metaphor for what some have called our “wasted year” (and counting). A year of canceled weddings, graduations, and vacations. A year in which fear drained our energy for other things, in which many were plagued by tragedy and physical suffering.

For many, plants have become a place of refuge, our ornamental plants at home are the new subjects of our great attention. It’s a handy distraction. Plants keep us company. Some of us even talk to them.

Plus, it’s a low-risk chance to nurture life when so much seems hostile to it. Even a grocery store these days can fill you with fear. A short, safe walk to your home garden, or even to the pots on your windowsill with its various hues and fresh leaves, can instantly lift your mood.

My plant guru Arman told me that some bougainvilleas like to get stressed, like heavy dehydration in a kind of botanical sadomasochism, before responding to a hose with a nighttime color surge.

As fulfilling as growing plants may be, it’s obviously not in the same league as raising children or even pets. But neither is the heartache.

Gardening enables decline and decline without the emotional debris of other types of loss. The life cycles of many plants are much faster and therefore death is common. But every fallen leaf is an opportunity for regrowth. Every rotting plant enriches the earth. Just like in human life, there is such a thing as post-traumatic growth and not just PTSD.

When a bright cosmos the color of sunsets spreads joy, it slowly wilts and turns brown before its hardworking plant father pulls it out and carries it and other carcasses to the compost pen. There it can start to decompose with kitchen scraps and the occasional heirloom seeds that came with a hearty salad.

If his plant father is lucky, he will find on earth where the carcasses do not come from bare ground, but from the joy of the day and something nutritious and completely unexpected for lunch. – LA, GMA News

Bring Your Own Bucket: Homewood to host composting event on July 24

Best Tabletop Composters to Go Green In Your Kitchen

30 Under 30: Katie Forsyth and Claire McLoughlin started Kamloops’ first and only residential and commercial composting service