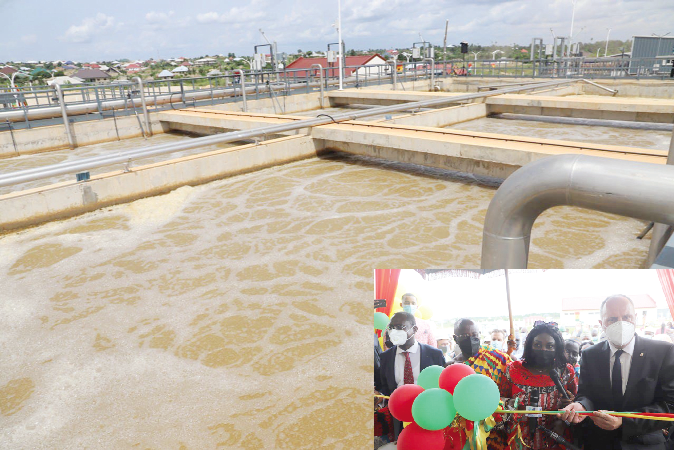 Ms. Ceceilia Abena Dapaah (with microphone), Minister of Hygiene and Water Resources, cuts the tape to get the plant up and running. With her are Asafohene, Acheamfour Asafo Boakye Mensah-Bonsu (in Kente), Joseph Siaw Agyapong (left), Executive Chairman of the Jospong Group, and Andras Szabo (right), the Hungarian ambassador to Ghana. PICTURED: EMMANUEL BAAH

The JOSPONG group of companies (JGC) has put a composting and recycling plant worth EUR 20 million into operation in Adagya near Kumasi in the Ashanti region.

Known as the Kumasi Composting and Recycling Plant (KCARP), the facility is part of the IRECOP (Integrated Recycling and Compost Plant) project of waste management giant Zoomlion Ghana Limited, which was set up to collect, sort, process and recycle waste.

The project, which started in 2017 and completed in 18 months, was built by Sewage Systems, also a subsidiary of JGC, and co-financed by EXIM Bank of Hungary and JGC.

The Asantehene, Otumfuo Osei Tutu II, represented by the Asafohene, Akyamfour Asafo Boakye Agyemang-Bonsu, was the special guest of honor at the event, which attracted many interested stakeholders, including the Minister of Sanitation and Water Resources, Ms. Cecilia, Abena Dapaah, official of the Ashanti Regional Coordinating Council and Editor of the Daily Graphic, Mr. Kobby Asmah.

The plant, a state-of-the-art 1000 m3 sewage treatment plant, is located in Adagya in the Bosomtwe constituency in the Ashanti region.

It extends over an area of ​​150 hectares and includes a waste disposal facility, a restaurant, a clinic, a cafeteria, lecture halls, an administration block, a conference hall and other auxiliary facilities.

It aims to provide a sustainable solution for the efficient and environmentally friendly disposal of liquid waste in and around Kumasi using a comprehensive European treatment technology.

In addition, solid waste is processed into reusable materials such as compost, plastics, metals and paper, with the by-product used as organic fertilizer.

It is expected that around 500 people will be employed right from the start to process a maximum of 1,000 cubic meters of waste per day.

In a speech at the start-up, JGC Executive Chairman Joseph Siaw Agyepong said the company’s vision is to work with the government to manage and cleanse the land.

To do that, the JGC was supposed to roll out e-waste projects in 10 of the country’s 16 regions, suggesting the company would receive $ 20 million in support from the Hungarian government to start waste disposal facilities in Tamale and Takoradi received.

In addition, GH 5 million has been allocated to research into the country’s solid and liquid waste and transform it into useful tools, he said.

This, Agyepong said, would facilitate studies on the subject at Ghanaian universities on how such waste can be converted into power generation companies.

He said this is also related to the government’s vision of creating an adequate waste management system across the country.

While applauding President Nana Addo Dankwa Akufo-Addo for the way he had dealt with the coronavirus disease (COVID 19) pandemic, he reckoned that disposing of feces in water bodies would help spread the virus The reason for this was that the subject of hygiene had to be taken seriously.

Ms. Dapaah, who officially commissioned the facility, said the facility was a historic milestone in handling waste management in the greater Kumasi area.

She said sanitation is at the heart of President Akufo-Addo’s government and that is why much is being done to fill the sanitation gap.

She commended the JGC for partnering with the government for its integrated liquid and recycling facility in all 16 regions of Ghana.

The minister announced that the World Bank has allocated an additional US $ 50 million as part of the Ghana Sanitation and Water project for its expansion over the next four years.

The ministry has also received $ 1 million from the African Development Bank to conduct feasibility studies on waste management in some parts of the country, particularly in the north, she said.

Ashanti’s regional minister, Simon Osei Mensah, said the project’s start-up will be a great relief for city dwellers, who will have to shoulder the brunt of indiscriminate waste removal and associated health hazards.

He was delighted that the plant would create jobs and become a learning center for the youth.

In a speech read on his behalf by the Regional Coordination Director, Mr Donkor, the Regional Minister praised the government for creating an environment in which the private sector can thrive.

On behalf of the Asantehene, Akyamfour Agyemang-Bonsu praised the government for the proper support for starting the project.

He said Kumasi and the surrounding area have struggled with waste management for many years.

The Asafohene demanded strict adherence to the hygiene regulations by the various assemblies so that the efforts of the Jospong group would not be in vain.

GARDENING WITH THE MASTERS: February suggestions for pruning, pest management and...

A newbie’s information to bonsai care

Ideas for garden, panorama care in April in NE Florida