Depending on where you live – and die – you may have new choices about how your loved ones grant your last wishes. In the past two years, several states have passed laws legalizing human composting as an alternative to cremation or burial, and that option is in other states across the country.

In the states that have legalized it, under this new law, you can choose to have your body composted after death and turn it to earth over several months. Joshua Slocum, advocacy director of the Funeral Consumers Alliance, told the Seattle Times he applauded the new option.

“In this country we have a massively dysfunctional relationship with death that does not make good public order principles,” Slocum told the Seattle Times after human composting was legalized in Washington. “The disposition of the dead, in spite of our great emotional ties, is not – except in very rare cases – a question of public health and safety. It’s really hard for people to navigate, and a lot of our state laws stand in the way of a return to simple, natural, straightforward, and inexpensive ways of doing things. “

Human composting is not only an easy alternative, but also a way to avoid the greenhouse gas emissions associated with cremation and land use of a funeral.

“Natural organic reduction enables a literal return to earth,” Anna Swenson, outreach manager at Recompose, a Kent, Washington company that has developed a “natural organic reduction” method of composting human remains, told The Guardian. “Some people like the idea of ​​being in a forest when they die. That’s what I chose. “

Fascinated? Here’s what happens if you choose human composting.

What is human composting?

Human composting is exactly what it sounds like – it uses the same natural process that works in your garden compost bin or heap to turn leftover food and garden trash into dirt. And forests benefit from human compost just like your garden.

“The forest needs the elements that are in the body – magnesium, calcium, phosphorus, and all of those things in the body are badly needed for the soil,” Walt Patrick told Popular Science. Patrick is a senior steward at the Green Burial non-profit Herland Forest, which offers natural organic reduction – human composting – as an option.

The Herland Forest process involves placing human remains, wood shavings and wildflowers from the surrounding forest in a rotating “cradle”. They use solar energy for heat to speed up the process, but note on their website that it still takes longer in winter than summer.

Recompose founder Katrina Spade (pictured below) became interested in human composting after learning how this process worked in an agricultural setting when farmers compost animals. Recompose involves placing human bodies in a jar of wood chips, alfalfa, and straw, but Spade points out that composting won’t work without another important ingredient: air. 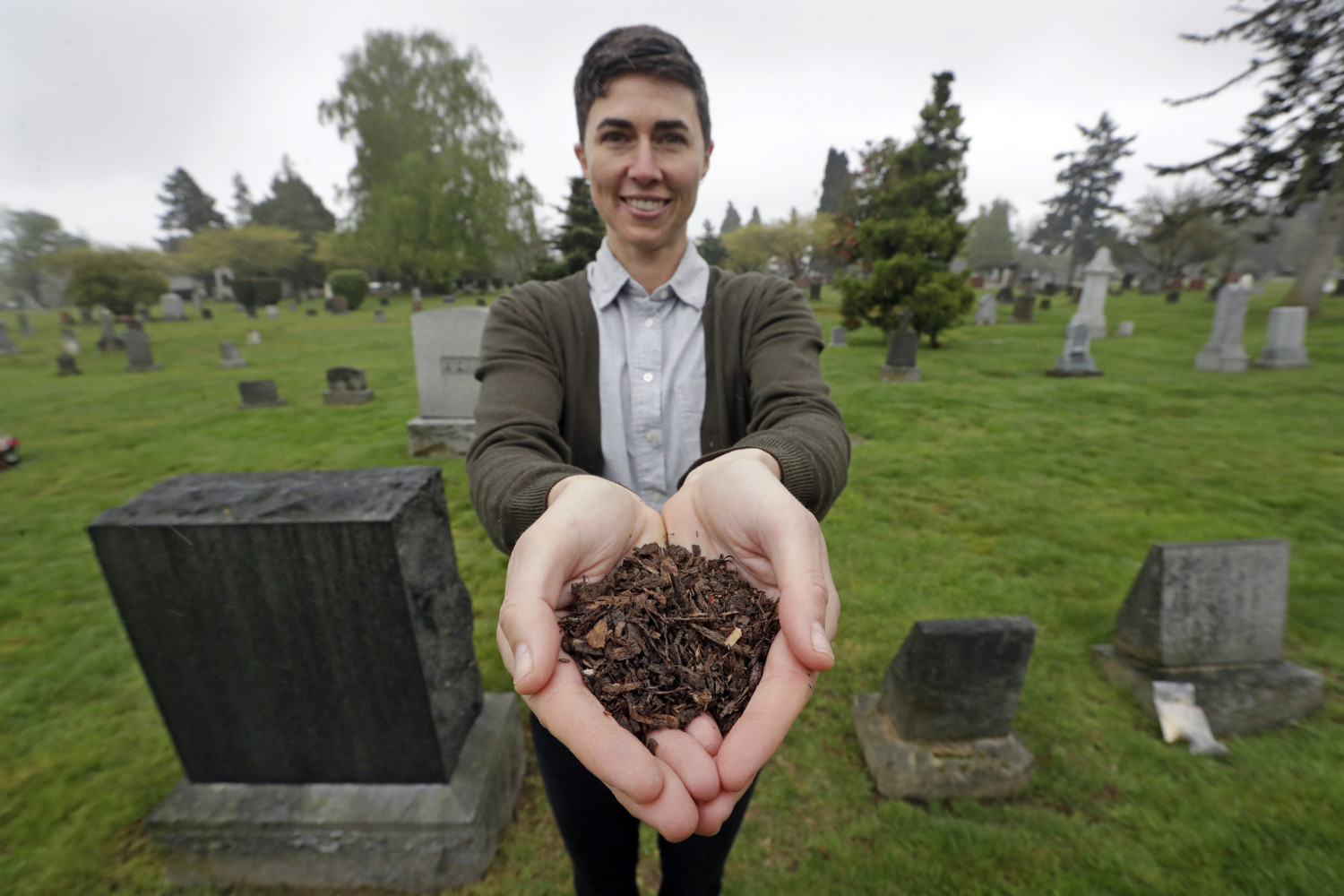 This is part of what sets human composting apart from simply putting a body in the earth – there is a process the remains go through to become earth.

“Oxygen is a really important part of the ventilated process because, essentially, we’re creating the right environment for microbes to do their job,” Spade told Bloomberg’s CityLab. “[It] needs oxygen, nitrogen and carbon, and then the microbes do a really nice job breaking everything down on a molecular level and creating this beautiful, usable soil. “

The process eventually even breaks bones and teeth, although it won’t work on non-organic materials someone might have in their body, such as an artificial joint or a pacemaker. At recompose, personnel remove these types of materials from the vessel while decomposition is in progress; Herland Forest removes them at the end. After the body has been converted into “soil improvement” – worth about a cubic meter, Recompose says – they offer the option to donate it to a forest that is part of a land trust in southern Washington. Herland Forest also offers a tree planting donation option, and they are giving people a year to pick up the compost scraps so people have plenty of time to make plans for it to be scattered on their own land if they wish.

Not to be confused with green burial, human composting deliberately turns the body into compost, which can then be scattered and brought back onto the land as earth, while green burial means simply placing the body in a biodegradable shroud in the earth is buried, so there is still a burial place, like in a traditional cemetery.

In this post on the Herland Forest Facebook page, you can see that human composting offers a different – and more sustainable – burial option than burial in a traditional cemetery.

Where is human composting allowed?

Washington State led the way with legislation that allowed composting by people with a law in 2019 – thanks in part to the advocacy of Spade in the state where their company is located.

Several other states have bills in the works, including Vermont, Delaware, New York, and Hawaii. Cal Matters reports that the Human Composting Act in California’s legislature is endorsed by both parties because both parties like the idea of ​​giving consumers more choices.

Colorado’s bill also received bipartisan support. Republican Rep. Matt Soper, a supporter of the bill, told the Denver Post it was both a good funeral service business and a good option for consumers, “giving people the opportunity to treat their remains as you do.” consider correct”.

Compost piles get just a bit too scorching | Northwest

How To Use Mushroom Compost

‘Drugs are a pest’ an awareness platform