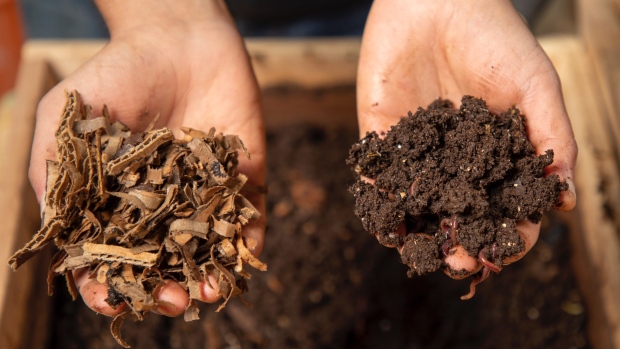 OTTAWA – If you want to reduce food waste, turn to the worms.

Worms can be your go-to stop when you want to keep kitchen waste from going to the landfill but you don’t have access to a green trash can, or when you want to make compost for your plants but don’t use the outside space to do so.

Akil Mesiwala is the founder of ‘The Box of Life’ and has developed an indoor solution for housing “Red Wiggler” worms, which he believes are ideal for composting.

“As soon as we have more respect for our food, we realize the importance of composting, not wasting food and thinking about how we can be better stewards of the land,” says Mesiwala.

The ‘Box of Life’ is a multi-level wooden box that serves as a habitat for hungry worms. Just throw in kitchen trash like banana peel and watch the magic happen. About a month later you will have food for your plants.

If you don’t have the garden or outside space to make your own compost, this could be a solution, Mesiwala says.

“It’s a lot easier for me to put my leftover food in my kitchen composter than it is to go outside when it’s minus 30 degrees and put it in the green trash can.”

How much trash can you give them?

Mesiwala says all you need to get the process started is to add worms and anything like cardboard or paper along with scraps of food. “A worm studio can compost between two and three kilograms per week. You can add layers to increase it to four kilograms. I would say that’s average for a family of two to three people. “

Is there a smell?

“Normally, your worm container smells like forest floor on average. like that really earthy smell after the rain, ”says Mesiwala. He adds that if there is a foul smell, it is an indication that something is wrong.

If you find worms a little gross, you’re not the only one. Mesiwala has a technical background and says he never touched a worm in his mid twenties.

“I’ve never played with earthworms and I was one of those kids who didn’t like getting their hands dirty,” he says.

Jimi Rose is based in Ottawa and has been using the worm habitat for a year. He keeps it in his workshop.

“The worms are always right at my feet. It’s nice to have them. “

He says his building doesn’t have a Green Bin program, so he’s using the worms to divert food waste away from the landfill.

“Every time I tossed it in the trash, I thought, ‘That doesn’t feel right.'”

What do i need to get started?

A three-tier box costs $ 200, but you need to bring worms to it too. Mesiwala says if you are in Ottawa you can buy the worms directly from him ($ 50) or you can find them on sites like Kijiji.

He regularly holds webinars that explain how to get started. There’s one on April 28th at 7:30 p.m. You can register here.

The way to compost: Don’t waste your waste | Feast and Subject: Meals Begins within the Subject

Sunflowers at museum convey message of magnificence from compost