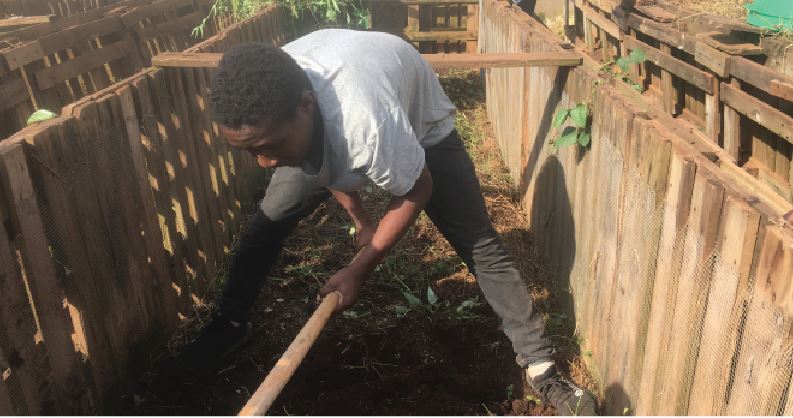 Kamwokya is one of Kampala’s most notorious slums, a place for drugs like marijuana and unsightly huts with unsanitary conditions.

But there are solutions, as demonstrated by a youth group in Kamwokya. The Kamwokya slum is not only overcrowded with people, but also with their garbage.
Adam Kakooza is the team leader at Innoveight Hub, a development and entrepreneurship social company that develops sustainability practices by using technology and innovation to empower young people.

According to Kakooza, this means creating a lot of humanity that finds its way into public space.
“With such a large number of people, there is no proper way of dealing with waste. They find that everyone dumps garbage everywhere, which has health implications, ”he says. According to Kakooza, the garbage is a serious public health threat leading to diarrhea, cholera and food poisoning as many slum dwellers eat on the streets. This situation prompted Kakooza and eight friends to do something to get rid of the human waste that is normally dumped in water channels.

“We saw an opportunity to clean up our community and create jobs among ourselves,” said Kakooza.

Birth of an idea
Humanure can increase agricultural yields and improve the condition of the soil by supplying nitrogen, phosphorus and potassium in a less soluble form than manure and fertilizers. Humanures are also preferred because they stay in the ground longer and are less likely to get into groundwater or run off. The manure also contains more organic matter than artificial fertilizers.

The communal composting project in Kyebando-Kisalosalo is part of an initiative that aims to provide qualifications in the areas of plastic recycling, waste management, urban horticulture, aquaponics and other activities in order to create income opportunities for unemployed youth in slums.

According to Kakooza, the idea started in March 2019 when the GiveLove Foundation trained an Innoveight team member in Karamoja on CBS (container-based sanitation) approaches including organic waste and composting by humanure. Kakooza says this was a suitable solution for pit latrines in an area like Kamwokya where the water level is high.

GiveLove later installed a composting toilet system at Lisa’s Care, a residence for disabled polio survivors in Kamwokya. Due to the success of the project and the high demand for composting toilets, GiveLove expanded its qualification program to Kyebando, where a second community-managed composting center was built on your premises in June 2019.

Later that year, GiveLove trained 20 youngsters in managing composting sites. According to Kakooza, the composting teams have composted more than six tons of compost collected by Lisa’s Care, the Ghetto Research Lab, City Future Gardeners – a community-based gardening and recycling project, Your Space Community Center – which operates two public toilets and the Colombia Base – a group of community activists working with GiveLove.

Kakooza now has 20 young people who are directly employed in waste collection and hardening.
Once collected, the manure is taken to the municipal composting facility in Kyebando for processing.

Composting process
Research suggests that human waste can spread harmful diseases. For Kakooza, this requires careful handling of the Humanure.

Human waste mixed with sawdust delivered to the communal composting center in Kyebando-Kisalosalo for the production of manure. PHOTO / GEORGE KATONGOLE

He says the manure is carefully transported to the composting site in spill-free bins before being dumped into a large compost bin. Technicians compost the humanures by integrating the mass into dry covering material.

A thick layer of dry grass is placed on top of the fresh material after all of the bins have been emptied to act as a “biological roof” to keep flies out and keep moisture in the pile. All of the black water used to clean the containers is poured into the compost container and leftover food and is kept at a stable temperature of around 35 to 40 ° C.

“Putting up a compost heap is all about preventing groundwater and surface pollution from leaching out. The composting cages are designed in such a way that no black water can drain away, ”he says.

Regular monitoring of temperatures is carried out through records that include the date the piles were opened and when they are closed.
The treatment does two things: it makes the sludge smell less and it reduces the amount of pathogens in the biosolids.

security
There are understandable concerns from farmers and consumers about pathogens, heavy metals, pharmaceuticals and other hazardous organic chemicals in human waste.
Most of the nutrients in human feces are in the urine – unless contaminated by feces, they are relatively sterile and can be easily used in crops with little treatment.

When the compost heap is in balance, it creates an ideal environment for beneficial microorganisms and fungi to thrive.
Such a composting process works like fermenters because microorganisms compete with each other and feed each other.

This composting process and the metabolic activity of the microorganisms generate high heat values ​​that can reach 65.50 degrees Celsius and more. This process is known as hot composting.
He says the first priority is getting rid of disease-causing pathogens to make it safe to use in agriculture or even landscaping.

“Immature compost produces phytotoxins that are toxic to plants. Good quality compost takes time to mature and heal, ”he says.

Services
While Kakooza is optimistic about the benefits of compost, he understands that many people would disapprove of the idea of ​​eating vegetables fertilized with Humanure. Public opinion, according to Kakooza, is mixed about biosolids – but in his experience this is a sustainable approach.

About one tonne of manure can be harvested from one pile. Samples are sold for Shs 15,000 for a pack of five kilograms while 10 kilograms are sold for Shs 28,000.
At the KCCA farm Kyanja, trials are already running in which the manure is tested for vegetable production. “We have received a lot of support from the farmers during this time,” he says, adding that they are waiting to raise awareness and produce safe humanurs.

Kakooza says that elsewhere, the volume of humanure produced is increasing and more fertilizer becomes available for agriculture.
“Farmers need more options, and that’s what we want to do to make farming affordable,” he says.

Letter: Compost facility must be sited away from residential communities

The right way to care in your spring flowering bulbs

Get the dust on the artwork of composting