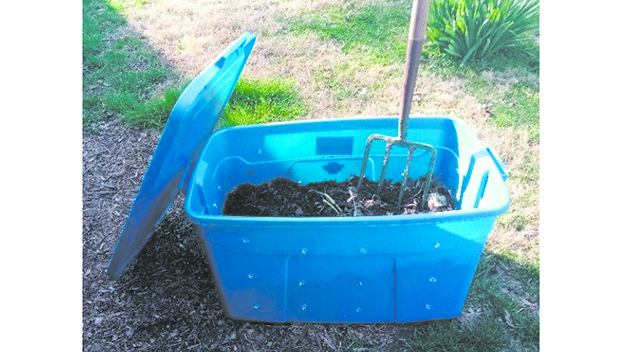 A few years ago, I got a fancy rotating compost bin for Mother’s Day. (Only a dedicated gardener would be delighted with such an unsentimental gift.) It was easy to throw in garden or kitchen debris, rotate it, and rotate it regularly for quick results.

The difficulty emerged three months later when it was found that it was difficult to get fresh compost through the trap door. It was even more difficult for me to drain the nutrient-rich liquid from the collecting basin below.

Then I read an article about making a simple compost bin from a plastic tub with a lid. I am ready for anything that requires little physical exertion and this looked like a lazy gardener’s dream.

The plastic tub was so successful that I bought another tub yesterday, so there is one tub for “cooking” and a second tub of ready-to-use compost. They sit next to the garbage cans next to the garage, out of sight but convenient to use.

The tub should be 18 gallons or larger; mine is the 31 gallon size. It must have a snap-on lid. It took less than 15 minutes to modify the tub and start the composting process another 15 minutes. Using an electric drill, I drilled holes in the sides and bottom of the tub that were a few inches apart and left the lid undrilled.

First, I threw a loose layer of twigs and sticks into the bottom of the tub. This will help air circulation and keep the drainage holes in the floor open.

I put partially decomposed compost from my old garbage can on the sticks. This will add microorganisms and start the process. A shovel full of dirt from the garden serves the same purpose.

With the enthusiastic help of two young neighbors, several worms were found and thrown on the pile. With the lid on, it was ready to go.

I’ve been composting for so long it feels like a sin to throw kitchen garbage in the trash. Vegetable and fruit scraps, used paper towels and napkins are collected in a pot under the sink and thrown into my trash can every or every other day.

Efficient people regularly stir their compost for quick results, but I just let mine sit until the bin is full. The top half or so, still in a recognizable vegetable form, is forked into another container. The good stuff is in the bottom half of the first container. The unfinished goop will continue to decompose in the other container and be ready later in the summer.

Not much happens over winter as the mass is not big enough to get hot in cold weather. Once the weather warms up, the process moves quickly.

There are a few things that won’t break down in such a small pile. Eggshells, corn on the cob, avocado husks, and pits come through unscathed, so they go in the trash instead.

I also learned not to include pumpkin, melon, or pumpkin seeds. A few always sneak in. They survive composting and appear all over the garden after the compost is spread out. If you have the space, it’s fun to grow some of them and see what you get. My mysterious vines produced cantaloupes, acorn gourd and pretty pumpkins for Halloween.

I wish you could see the lovely dark crumbly earth that just got out of the first trash can and is ready to be used in the garden. It looks like the best quality potting soil, with no odor, but with good, clean dirt.

I gently scratched it around my best plants and put a ball in the new planting hole. There’s never enough to go as far as I want to, but isn’t that the case with most of our favorite things?

A layer of compost, minus the worms, ends up in the bottom of containers for indoors or outdoors. When roots spread in the potting soil and eventually reach the compost, they get a boost with no gardener work.

Compost heaps need both green and brown material. Too much fresh, green vegetation becomes wet and slimy. Too much dried, brown material like autumn leaves or dry stems, and not much happens for a long time.

If your compost smells bad or attracts insects, it will need a layer of brown material. Shredded newspapers, cardboard egg boxes, straw or old leaves work perfectly. The worms and microbes mix everything together in time.

Friends with horses just gave me four tubs of composted manure. This is another unsentimental gift to make a gardener’s heart sing. What could be more satisfying on a sunny spring day than playing with manure and compost? Not everyone has access to manure, but everyone can make a simple compost bin and produce their own rich dirt.