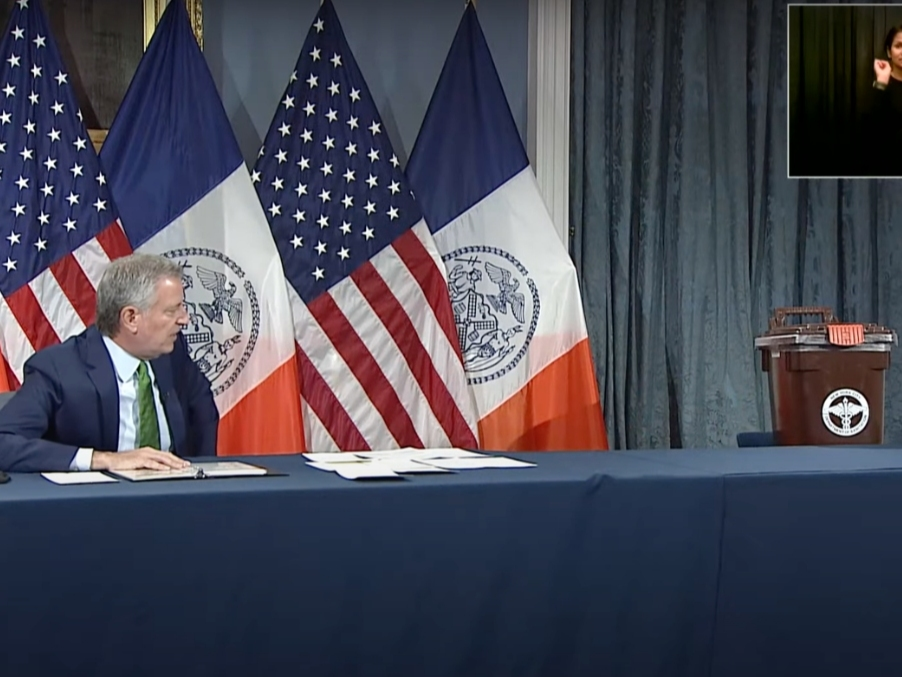 NEW YORK CITY – A special guest speaker has broken Mayor Bill de Blasio’s announcement that compost is making a comeback in the city.

New York City will resume its roadside compost and organic program that was scrapped during the coronavirus pandemic, de Blasio said Thursday.

For details, he turned to his special guest: a brown compost bin.

The trash can stayed silent for a few awkward seconds.

“The trash can is here …” said de Blasio, leaning into the teeth. “You know, I’m confused, I was told the trash can has comments and it’s a trash can. It’s a very nice looking, slim trash can, but with nothing to say.”

Fortunately, the silence ended when de Blasio reached out to Sanitary Commissioner Ed Grayson, who filled in details of the program’s rebirth.

The curb program will roll out to 3.5 million New Yorkers on an opt-in basis, with services starting October, Grayson said.

Registration for the program begins in August.

Grayson also announced that the number of community composting sites will double.

These community sites have collected 1.3 million pounds of organic material in the past seven months, Grayson said. He said plumbing will also drive new “smart bins” linked to an app for access to organic deposits.

“School roadside composting is returning to the nearly 1,000 schools that had composting before the pandemic,” he added.

Aside from the news of roadside composting, the announcement also showed de Blasio’s increasing willingness to engage in lighthearted comedic things and make fun of himself.

He – a notorious Red Sox fan – recently donned a Yankees hat to announce a vaccination site at the stadium, rode the Cyclone to promote the reopening of Coney Island, and filled announcements with whale-sized puns.

The change in attitude comes as de Blasio – who eschewed playful events for years – tries to encourage the city’s comeback after the pandemic. It was such a remarkable change that the New York Times recently detailed it in a story called “Why Bill de Blasio Is Finally Having Fun Being Mayor”.

CBS reporter Marcia Kramer, who noted on Thursday that de Blasio had included an “Electric Slide” reference in his briefing, asked what was responsible for the change in Hizzoner.

De Blasio was relieved when the city recovered from the pandemic.

But de Blasio’s good humor did not extend to his archenemy – no, not to Governor Andrew Cuomo.

“I just want to make one point about the trash can …” he said as he closed the briefing, “… really let us down. The trash can asked us for an opportunity to speak and just … you can bear silent testimony if you will, but I just felt this was truly a missed opportunity. “

Weston residents warming as much as composting