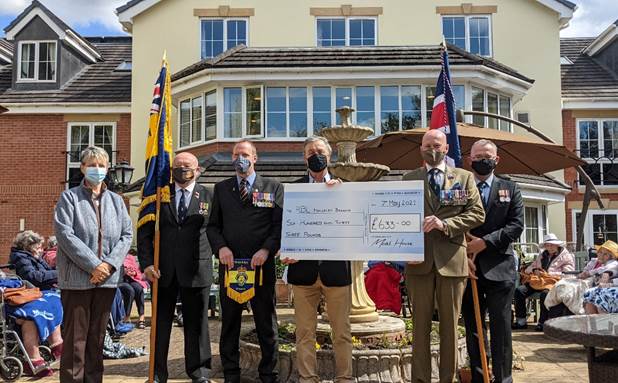 Pictured above: Dave Lock hands the check to Lloyd Bagshaw

A Burbage nursing home honored a former resident by presenting a check to the Royal British Legion.

Residents of the Moat House Care Home presented the check on behalf of the home in memory of former resident and former President of the Hinckley Branch of the Royal British Legion, Ronald (Ron) Collyer.

Branch chairman Lloyd Bagshaw, along with fellow RBL members and Ron’s children, Ian and Barbara, received the check as part of VE Day celebrations in the gardens of Moat House Care Home.

Lloyd Bagshaw said, “We would like to thank residents for this donation to honor Ron and to thank him for his service, both for the settlement and for his dedication and sacrifice during the war.

“Ron was a popular and valued resident of Moat House, calling home for nearly five years. He was a well-known local newsagent and a talented musician who performed alongside big names like Larry Grayson.”

The fundraiser will help place a memorial bench in front of the Argents Mead War Memorial in honor of Ron.

Care Manager, Collee McKay, said, “Ron would play the piano or just sing happy birthday to one of his roommates for our special occasions, resident singalongs, and as a long-time member of the Moat House Choir Club.”

She said, “Dad would have loved today. The Royal British Legion and Moat House were very important to him. I’m sure he would have been proud.”

Brenda, a resident of Moat House, said Ron could always be found at the organ.

She said, “Our VE Day garden street party was the perfect place. It’s nice that we can remember him and the joy he brought to our home in this lasting way.”

You can find more information about the Royal British Legion (Hinckley Branch) on their Facebook page here.

Put your Leicestershire Burbage in the spotlight by becoming an Area Ambassador.