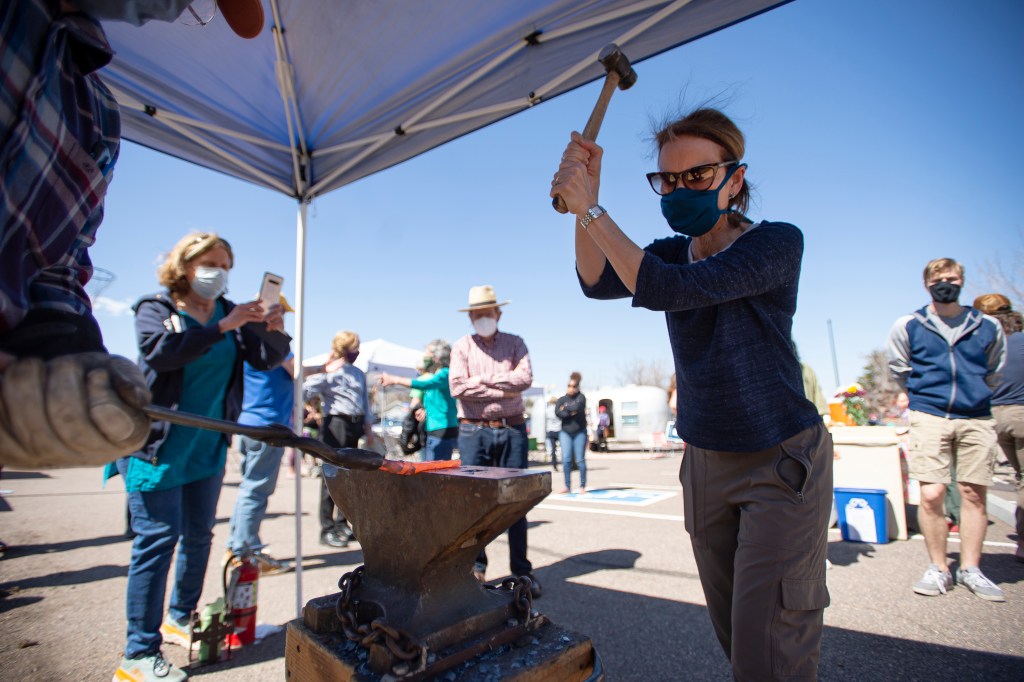 Healing was done with a hammer on Friday at Boulder Mennonite Church.

Dozens of parishioners gathered in a vigil on Good Friday to pray, reflect, and remember 10 victims of a mass shooting at the King Soopers on 3600 Table Mesa Drive on March 22nd.

Ivanna Johnson-McMurry pounds on a section of a gun barrel held by blacksmith Jerry Martin during a demonstration of blacksmithing in garden tools at a Good Friday vigil at Boulder Mennonite Church. (Timothy Hurst / employee photographer)

The event was accompanied by the steady clink of a hammer as people take turns shaping dismantled guns into garden tools a quarter of a mile from where the shooting took place. Boulder Mennonite Church is located directly across from Broadway at 3910 Table Mesa Drive.

Colorado Springs-based RAWtools travels the state and country offering demonstrations, non-violent training, and activities related to gun violence. These demonstrations are a central part of their work – taking donated weapons, dismantling them, heating the metal in a forge and turning them into tools, a literal application of a verse from the book of Isaiah in the Bible: “They will strike their swords into plowshares and their spears in cut hook. “

The vigil was boosted by the mass shooting, said Pastor Randy Spaulding. The Church had planned a brief Good Friday service first, and then it was March 22nd. Mike Martin, founder and CEO of RAWtools, reached out and offered to come over, as did other faith leaders.

“We said yes, let’s take a swing and hammer the hell out of a weapon and make something out of it that will be used to heal, cultivate and care for the earth,” said Spaulding.

Many Church members shop at these King Soopers and know the victims, he said.

People are often grateful for the chance to swing a gun, Martin said. He started RAWtools eight years ago after filming at Sandy Hook Elementary School.

“We respect thoughts and prayers, but we also feel that this must lead to action. We can pray and make statements, but if we don’t do anything beyond that, we’re still falling a little short, ”he said.

“We are offering an opportunity where you don’t have to wait for legislation. It is an open invitation for people to swap their weapons for gardening tools, but also an open invitation to envision different ways of resolving our conflicts,” he continued away.

The guns used in Friday’s demonstration were donated by Colorado residents this week, Martin said.

The experience brought tears to Holly Varga, who lives in Lafayette. She felt the effects of the shooting, she said, but coming to Boulder to visit the memorial and hammer a gun among fellow community members brought new meaning.

“Little did I know it would be so powerful just to be with people,” she said. “You see that there really are opportunities to change something. I reconnected with the importance of expressing yourself through action. “